This isn’t the first time James Twyman has been called to participate in peace dealings. It has been his life’s work for over 20 years; he has sponsored prayer vigils and even played in Iraq in 1998, when asked by Saddam Hussain to do a peace concert with over a million people.

I spoke to him while he was in Assisi, Italy, and he told me that 30 years ago, leaders from 12 major religions came together to pray their peace prayers from their respective religions. James received these prayers in 1994 from a friend, learned them, and put them to music. He soon realized what it was his calling to share them with the world.

Years later, he still sees the immense value in people coming together in a harmonized way for peaceful outcomes. This…

The water crisis in Flint, Michigan has inspired an unlikely partnership: a local militia group is coordinating with outspoken liberal filmmaker Michael Moore to demand accountability and clean water for residents.

Moore, a Flint native who first gained notoriety for his his documentary on the town’s economic hardships, has spoken out against the state and local government’s negligent handling of the disaster. The high volume of lead in public water supplies has contaminated children’s blood and led Flint’s mayor to declare a state of emergency.

The crisis has drawn widespread attention and outrage.

At a rally on January 16, Michael Moore said, “I am standing in the middle of a crime scene. Ten people have been killed … because of a decision to save money.” The city’s water supply was changed from Detroit’s water supply to the Flint River in 2014…

Israeli Prime Minister Benjamin Netanyahu says Saudi Arabia now sees Tel Aviv “as an ally rather as an enemy” as he claims “a great shift taking place” in the Arab policy toward the Palestinian issue.

“Saudi Arabia recognizes that Israel is an ally rather than an enemy because of the two principle threats that threaten them, Iran and Daesh,” he told CNN’s Fareed Zakaria on the sidelines of the World Economic Forum in Davos Friday.

Both Saudi Arabia and Israel are fiercely opposed to a nuclear accord between Iran and the West which came into force recently. They are worried the agreement could boost Iran’s role in the region.

Last week, The Wall Street Journal reported that Israel was actively seeking to strengthen ties with Arab powers in the wake of the nuclear deal with Iran.

– A leaked Ministry of Defense report reveals that the Obama administration is “completely destroyed” after their top-secret mission in transporting a top ISIS leader was uncovered and thwarted by Iran:

Once this Islamic State terror leader was in route to Kuwait aboard one of the US Navy’s RCB’s, this report continues, an “overwhelming” force of Iranian Sepāh naval troops captured both this terrorist, the US Navy boats (including the American sailors aboard them) transporting him and nearly ignited an all out war when Iranian forces were forced to fire “warning missiles” against the US Navy’s aircraft carrier USS Harry Truman attempting to intervene. 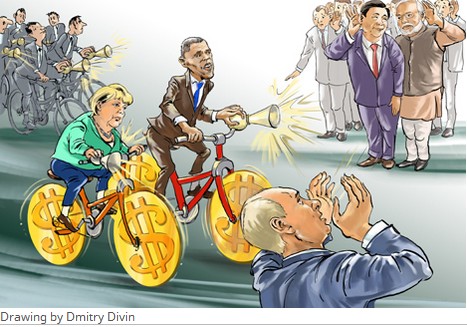 January 21, 2016 “Information Clearing House” – “RBTH” – The interview that Putin gave to the Bild newspaper a week ago may be to somebody’s liking or disliking, but it made one thing clear: in it, Putin was addressing certain people in the West with specific proposals. These proposals might be adequate and appropriate or might not be, but it is obvious that Putin is not throwing them into the void. He realizes that there are people out there who can hear him…

It would seem that the Western world is consolidated and pretty plainly (for instance, through Obama’s statements) has shown Putin (and Russia) their place. The word The Hague (Ed. where the U.N.’s International Court of Justice and the International Criminal Court are located) has not yet been used in relation to…