–  “…Perhaps that has something to do with the little-known fact that a Learjet belonging to Hilliard, who owned the Venice flight school that trained both pilots who flew planes into the World Trade Center Towers, had been caught carrying 43 pounds of heroin by DEA agents in July of 2000.”

– On the campaign trail in New Hampshire two weeks ago, Jeb Bush was asked a question for which he clearly wasn’t prepared, which hearkened back to Bush’s time as Florida Governor. You can see the question here.

“According to Sergeant Marty (Mike) Treanor and other law enforcement officials in Sarasota Florida, the files pertaining to 9/11 hijacker pilots Marwan Al-Shehhi and Mohamed Atta from Huffman Aviation Flight School in Venice Florida were loaded onto two Ryder trucks and driven onto a C-130 cargo plane which left Sarasota the day after 9/11,” began newly-minted radio talk show host Mike… 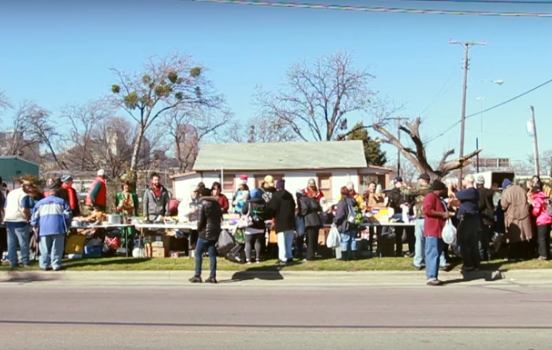 When feeding the homeless becomes an act of civil disobedience, Americans have been asleep for far too long.

Luckily, however, there are still good people who are willing to defy such arbitrary and ill-conceived laws and ordinances.

The folks over at the aptly named organization Don’t Comply, took to the streets just outside the Austin Street Shelter in Dallas this weekend to perform, what has now become a revolutionary act – feeding the homeless.

“We are not complying with a bad law today,” Matthew Short, PR director of Don’t Comply said. “Evidently the city of Dallas believes that it’s wrong, or bad, or unlawful for us to feed more than a certain number of people at a time. But, during Christmas, we want to show love to our community and give these people a chance to survive the winter, whether it be with blankets or coats, or just giving them…

HEBRON – A Palestinian father living in Hebron’s Old City told Ma’an that his 7-year-old daughter was injured while being chased by notorious Israeli extremist Baruch Marzel on Monday.

Raed Abu Irmeileh said that he had to take his daughter, Dana, to the Hebron Governmental Hospital “after she had fallen to the ground while being chased by Baruch Marzel near the Ibrahimi mosque.”

Irmeileh told Ma’an that Israeli forces present in the area did not stop Marzel from chasing his children, and assaulted his 10-year-old son Hutasem as well as two brothers Nabil, 14, and Farhat Nader al-Rajabi, 10.

An Israeli army spokesperson did not have immediate information on the incidents.

“There is now a big group of Conservative members of Parliament who are pro-Israel whatever government does and they are not interested in what Israel, in what the Israeli government does.” Labour MP Sir Gerald Kaufman has allegedly accused Israel of fabricating some recent stories about knife attacks against Jews in Israel, and claimed the Conservative party is influenced by “Jewish money,” in a speech at a pro-Palestine event at Parliament.

As reported by The Jewish Chronicle, Kaufman, MP for Manchester Gorton and Father of the House, told the audience at a Palestine Return Centre event that the Government has become more pro-Israel in recent years due to donations from Jewish groups.

More than 500 jihadists cared for at the Ziv Medical Centre

Several journalists who were participating in a media tour organised by the Australia/Israel and Jewish Affairs Council (AIJAC) were able to visit the Ziv Medical Centre, in Zefat (North Israël). The hospital has at its disposal a service specialising in war traumatology. It is government-run and linked to the Israeli Defence Forces. In this context, it treats Syrian « refugees ».

While the rest of the group – the assistant chief editor of the Daily Telegraph, Ben English ; the journalist from Seven News, Alex Hart ; the political reporter from Sky News, David Lipson ; the chief editor of the Australian Financial Review, Aaron Patrick ; the head of the political column of the Sydney Morning Herald and The Age, Bevan Shields – followed the organisers, a famous journalist from News Corp… According to news reports:

Arizona Senator McCain crossed into Syria form Turkey with General Salem Idris, who leads the Supreme Military Council of the Free Syrian Army, and stayed there for several hours before returning back.

The senator met with assembled leaders of Free Syrian Army units in both Turkey and Syria. McCain with al-Baghdadi from TV report

According to AP, McCain crossed the border near Kilis, Turkey, and spent two hours meeting with ‘rebel leaders’ near Idlib, Syria. The article further states that McCain made the trip in order to demand “aggressive military action in the 2-year-old Syrian civil war, calling for the establishment of a no-fly zone and arming the rebels”.

36th Commandant of the Marine Corps
This has been moving around the Internet for a couple of days now – no official source – yet, known to be “official.”  This suggests the formal announcement is soon to be made.  So, enjoy this great message from our soon-to-be Interim President of…. the New Republic
www.HollowEarthNetwork.com

US-installed fascists have no legitimacy whatever. Polls increasingly show it.
Last summer, Ukrainians were asked who they trusted most to lead them. Vladimir Putin was named overwhelmingly by 84% of respondents – even though he’s Russian, not Ukrainian.
Illegitimate oligarch president Poroshenko scored 1%, Obama 1%, Angela Merkel 1%, illegitimate prime minister Yatsenyuk and various other Ukrainian officials 0%.
Ukrainians nationwide despise their ruling regime for good reason. It’s ruthlessly despotic, hugely corrupt, run by illegitimate officials, and at war with its own people.
Poroshenko’s approval rating dropped from 47% several months after his May 2014 anointment to a new 17% low now – falling further from all indications.
When Washington ousted his predecessor Viktor Yanukovych in February 2014, 20% of Ukrainians supported him.
In Eastern areas Kiev controls, Poroshenko’s approval rating is 11%, in Southern areas a scant 7%. Elsewhere he scores…